For the past 14 years Lesley Robinson has been at the helm of Little Herbal Company, her story is conclusive proof that we can all change direction in our careers, and lives.

I was a clinical marketing director for a large US pharmaceutical company and this had been my career for 14 years.  I had been skiing in January 1998 and sustained a knee injury which hadn’t responded to an operation or physiotherapy.  It was incredibly swollen and I had been taking anti-inflammatory pain killers every day for four months.

I went on holiday to Zimbabwe in April 1998 with Glyn, who is now my husband (and a Yorkshireman), and was taken to a n’anga (traditional healer) called Rosina, in the middle of the African bush.  She said she could cure my knee injury.  I had to boil up a plant she gave me, in a tin can, and apply it twice a day to my injured knee using a stick.  I had to treat my knee like this for 3 days after which I had to return the plant to her and she would bury it where she had taken it from the ground.  The day after I started the treatment I went for a walk in the bush with two pain killers in my pocket.  I returned from a 14k walk still with them there – no pain, no swelling – a perfect knee. 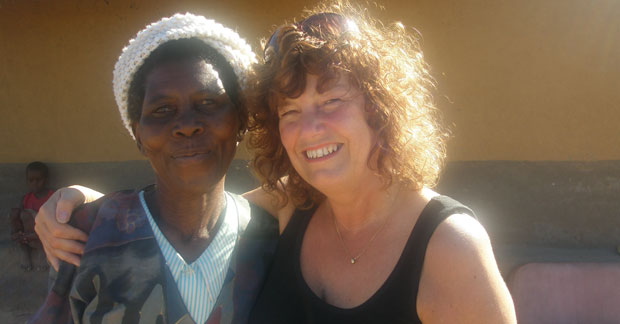 My interest in African herbs was awakened and we took back to England some cream from the African sausage tree for my father in law, in Holmfirth, who had suffered from psoriasis for 64 years and also for some friends with eczema.  Within a couple of months, their conditions had cleared up and so in December 1999, just 8 months after I visited Rosina, I gave up my career to start my Little Herbal Company specialising in traditional herbal remedies from Africa.  We have a small range of innovative products which help with many different conditions such as eczema, psoriasis, depression plus auto-immune conditions such as rheumatoid arthritis, fibromyalgia, lupus and ME.  Little Herbal has gone from strength to strength and we’ve helped so many people all over the world.  We sell our products ‘by word of mouth’ and have a number of celebrity clients who have written about us, including Barbara Windsor, Deena Payne (ex Emmerdale) and Jeff Hordley and Sam Giles (Emmerdale).  In 2001, BBC Look North came out and filmed us for a feature and I have told my story on BBC Radio Leeds and Hull.  I have also appeared live on ABC TV in the USA. 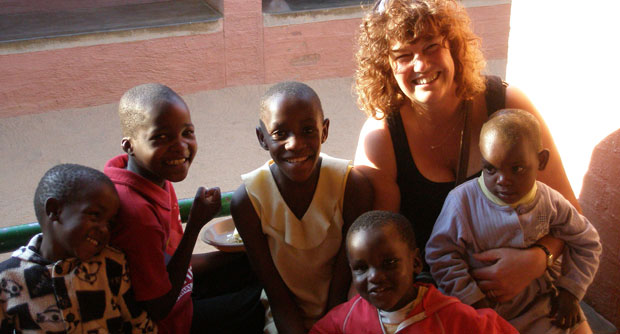 Lesley with children from the Ethendweni Orphanage

But, the best thing is that, apart from the fact that we continue to help our customers, we have also been able to put something back into beautiful Zimbabwe to whom we owe so much.  Little Herbal has paid for a maternity unit at Rosina’s local clinic, a library building at the local school, wheelchairs, chemotherapy drugs, beds, surgical operations (the list is endless).  Three years ago we became involved with Ethendweni orphanage and many of my customers have sponsored some of the 34 children there, whose lives have all been affected by AIDS.  I sponsor three children myself – Carole, Blessing and Lassale.  Their stories are incredibly sad – Blessing was thrown down a latrine when he was only one day old because his mother couldn’t look after him, Lassale was found in a house tied to a bed.  He had been there for 10 years because he was mentally and physically handicapped.  Little Herbal also supports Rosina and her family on a monthly on-going basis.  Along with my very good friend Sharon Stead, who is a fourth generation Zimbabwean living in Bulawayo, we have founded the Mother Africa Trust of which I’m a trustee.  Mother Africa is basically there to help anyone who needs help in Zimbabwe (and believe me there are lots).

So, from a chance meeting (or was it chance?!), so much good has come and we’ve helped so many people.  We now despatch our products from Kerikeri to 15 countries worldwide.

I’m often asked to talk to various organisations and people always say that it’s a story full of love and hope.  I am now a qualified herbalist and write a monthly health column in Savvy Magazine, which goes out with Whangarei’s Northern Advocate newspaper.  At the age of 62 life is a brilliant exciting and fulfilling adventure, which is just how it should be.

I have a good friend who says ‘when you get on the right escalator of life, you go at a hundred miles an hour’  She’s right !

We review The Whatever Pan from Jean Patrique

View Open
Block out your diary and set an alarm for 5.00pm t

View Open
#PressSample Ballet Flats are one of my favourite