The Flames of Sex and Intimacy survey report that talked to 1200 people aged 60 and above about their sex lives, found that nearly half (48%) of UK adults over 60 feel more confident in their sexual relationships than ever before.  With one in five (19%) revealing they are much more confident now than when they were younger, with many respondents enjoying an active sex life into their 60s and far beyond.

The report was commissioned by Replens™, the clinically tested, number one GP recommended vaginal moisturiser brand. The report also found that 39 per cent of adults aged 60 and over, say sex continues to be an important part of their relationship. Plus, 45 per cent said they are more at ease with sex and intimacy with the passing years, with 22% describing themselves as much more at ease.

What the Sex Experts say

Sex and relationships expert Tracey Cox adds, “The second half of your life isn’t second best. Rip up the memo that says you’re meant to become sexless, invisible and dull when you hit your 60s. Regular sex is what will keep you in peak condition – physically and emotionally. Sex boosts our immune systems, reduces stress and improves memory. Regular sex brings pleasure into our lives and increases production of oxytocin, the cuddle hormone, promoting trust, intimacy and bonding. It makes us feel less depressed and more positive generally, enhancing self-esteem and confidence.”

What holds women back?

The report also delved into what inhibits women from intimacy now compared to when they were younger. Struggling with vaginal dryness was hailed as a problem for women with 27 per cent blaming it and, 45 per cent admitted they aren’t currently using any products to help with the condition. Plus, two thirds did not know the difference between a vaginal moisturiser and a lubricant. Changes in body shape were also a problem with 24 per cent struggling with this and 20 per cent of women struggled with the symptoms of the menopause.

Vaginal dryness is a surprisingly common yet, little talked about female problem. It affects just about every woman after the menopause, but it is not just confined to this age group. It also occurs in younger women after childbirth, after hysterectomy, and as a side effect of some medications – especially oral contraceptives. Vaginal dryness can also occur in autoimmune conditions including Sjogren’s syndrome. This condition is most common after the age of 30, and nine out of ten sufferers are female.

Tracey Cox says, “I’d strongly suggest anyone experiencing vaginal dryness to start using a vaginal moisturiser like Replens. They’re different from sexual lubricants: you can use them when you’re not having sex to keep everything moist and comfortable and before intimacy too. They can be used in combination with HRT or instead of in some cases. They’re also hormone free, so if you can’t use HRT, you can use these (and you don’t need a prescription). If the discomfort is severe (and your doctor has given you the go ahead), you might want to consider using oestrogen pessaries as well.”

Replens™ works by lining the inside of the vagina, providing moisture, lubrication and comfort. The gel stays in contact with the vaginal walls for several days while the purified water it contains is absorbed, enabling women to feel more confident and comfortable helping them to achieve a long-lasting sex life. Replens is available from Superdrug, Waitrose, Sainsbury’s, Amazon* Lloyds Pharmacy and Boots* stores nationwide, 35g tube (with re-usable applicator) £11.49. 6 single use prefilled applicators £10.99. (12 applicators available on prescription). 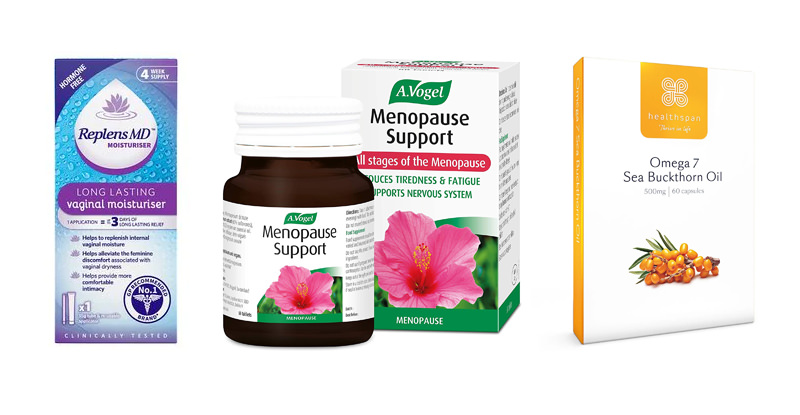 Sea Buckthorn oil is a traditional remedy for a variety of dryness conditions, including dry eyes and vaginal dryness. Sea Buckthorn oil supplements can improve hair and skin quality as well as reducing any tendency towards dryness throughout the body, such as eczema, dry eyes, dry hair and female intimate dryness. It is especially helpful for women around the time of menopause. Try Healthspan Omega 7 Sea Buckthorn Oil* 60 capsules £16.95

To help the physical aspects, start by using a supplement containing soya isoflavones. This is a group of plant substances known as phytoestrogens because they mimic the action of oestrogens in the body. Try A.Vogel Menopause Support, 60 tablets £14.99 available from A.Vogel, Holland & Barrett and independent health shops.

Staying hydrated is a simple yet effective way of keeping mucous linings moist, including those around the vagina, by drinking plenty of water. Drinking a lot of alcohol or caffeine can have the opposite effect, as these dehydrate the body.

Some medications including allergy or cold treatments can also dry out mucous membranes. If your doctor or pharmacist is able to suggest an alternative form of medication, then this could help your vaginal dryness.

Visit Replens to find out further information but if symptoms persist you should go and visit your GP or gynaecologist for specialist advice. 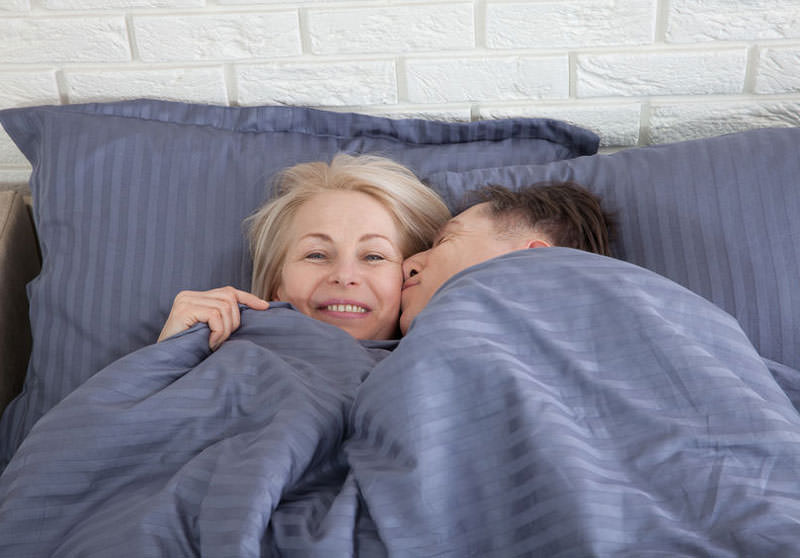 View Open
The beauty of a @bloomandwild subscription means t

View Open
How do you feel about exercise? Do you love it and