Pancreatic Cancer is the most fatal form of cancer in the UK, with only around 4% of patients surviving five years or more

This is something that hasn’t changed much in the last 40 years.  It is the fifth most common cause of cancer deaths (after breast, lung, bowel and prostate) and around 8,500 people are diagnosed with the disease in the UK every year.

For November’s Pancreatic Cancer Awareness Month, charity Pancreatic Cancer UK has launched a new campaign, Every Life Matters.  The campaign supports the charity’s aim to create a better future for every single person diagnosed with pancreatic cancer and acknowledges that every life lost to the disease, matters.

What is pancreatic cancer?

Pancreatic cancer occurs when abnormal cells in the pancreas grow out of control. It can occur in the head, body or tail of the pancreas.

Exocrine tumours start in the exocrine cells that make enzymes to help digestion.  Over ninety five per cent of pancreatic cancers are classified as exocrine tumours and about 90% of these are called pancreatic ductal adenocarcinomas (PDAC).

Find out more about the different types of pancreatic cancer here.

Signs and symptoms of pancreatic cancer

Pancreatic cancer doesn’t usually give rise to any symptoms or signs in the early stages.  This is the main reason it can be so difficult to detect and diagnose.  As the cancer grows the symptoms it causes will depend on the type of pancreatic cancer and where it is in the pancreas.

Any symptoms people do have can be quite vague and may come and go at first. An example is abdominal pain, which may start off as occasional discomfort before becoming more painful and more frequent.  The symptoms can also be a sign of other more common, less serious illnesses.  This means that people may end up seeing their GP several times or being sent for a number of different tests before pancreatic cancer is even considered.

If you have persistent unexplained symptoms it’s important for your GP to refer you for tests to explore what is causing them.  It can help to note down the frequency of your symptoms and mention anything unusual you are experiencing, even if it seems unrelated.  If your symptoms get worse or you develop any new symptoms suddenly you should always get in touch with your GP.

Most common symptoms of pancreatic cancer

Most pancreatic cancers are exocrine tumours (90%). Their symptoms can be very vague and depend on whether the tumour is in the head, body or tail of the pancreas.

Other common symptoms of pancreatic cancer

These symptoms are also common, though not everyone will have every symptom. People may have these symptoms before a diagnosis, develop them later on, or perhaps not get them at all.

Karen shares her experience of pancreatic cancer.  She was diagnosed with operable pancreatic bile duct cancer in 2010, aged 51. 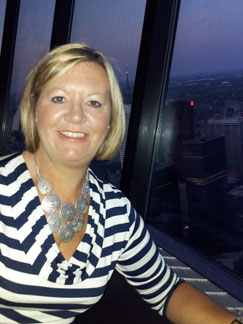 I was diagnosed officially on 12th September 2010.  I had been feeling off it for some time, feeling sick and then severe abdominal pains at night, which the GP said was indigestion.  Then suddenly I started to turn yellow, skin and eyes and unbearable itching, so I was sent for blood tests which showed my bilirubin was extremely high and I went for a scan that same week.

This was followed by an MRI scan and 3 days later a stent insertion which eased the symptoms.  Six weeks later after my pancreas had calmed down I visited my surgeon Mr Andrew Smith at St James, Leeds, and he said there was a high possibility the blockage was a cancer in the pancreas, but as it had showed no abnormal cells in the brushings when the stent was inserted they could not be 100% sure.  He suggested a Whipple’s procedure which I was eligible for and given the choice of having it done the following week or I could wait.  But when I asked him he said if it was cancerous the latter choice may not be the best, so I went ahead on 20th September 2010, and yes it was cancerous.  I was made aware of the risks but felt there was no other choice.

I was told it was nothing in my lifestyle that had caused it; I was a fit healthy non-smoking and odd glass of wine woman.  After eight days in high dependency, and four weeks in hospital I came home.  Six weeks later I was asked to partake in the Bilcap trial and I began as one half of patients who partake in chemotherapy and monitoring, but on the 12th day of the first cycle it had to be stopped as it was causing the arteries to my heart to constrict, so now I just get routine scans and appointments with my surgeon.

It was four months before I felt anything like normal, and it was extremely hard. The more I looked at articles online the worse I became so my husband suggested I stopped reading them.  Although the hospital were fantastic with my care up to and during my treatment, I felt support from local organisations lacking somewhat due to their lack of knowledge, as actually there are very few Whipples patients around.  I still feel that is the case, although the new material available through Pancreatic Cancer UK is excellent and wish I had seen that in the early days.  I met some ladies with other cancers at Macmillan but otherwise felt somewhat abandoned as there were no support groups.  I felt the help I got from our local hospice was good as the complimentary therapies were excellent and helped me relax.

When you are recovering, which will take a long time, eat what you want when you want.  Rich tea biscuits are good for nausea and diluted cranberry juice is nice.  Have a rest on an afternoon, say no to visitors if you feel you have to.

My husband has been fantastic and don’t really know how he put up with me at times, as I went from calm to crying to depressed and wondering when I would start to feel better if ever.  I wouldn’t look to the future or plan anything.  That was when it was suggested I see the Clinical Cancer Physiologist, who actually thought I was coping quite well.  I took the decision to give up work which was also hard but due to me not knowing from one day to the next how I would feel I felt it best, but that hit me hard as well.  I used to get frustrated but had to accept I couldn’t do what I used to.

I still get tired as the day goes on, and have bouts of diarrhoea and stomach cramps but after being given the wrong information by the dietician on how and when to take my Creon, I now take it 10 minutes before food and half way through as advised by my surgeon.  He said not to break the capsules open as they are not as effective in the gut then.  We try to go out for a walk when the weather is good, the outdoors seem so much more appealing these days.

7 months after my Whipples we paid a surprise visit to our daughter in Miami, followed by a trip to China on the anniversary of my operation.  We did go to the Olympics even though I said I wouldn’t be here and have been to the Rockies, Marrakesh and again over to the USA.

How to eat to protect your heart health

What are the best vitamins to take during menopause?

View Open
Block out your diary and set an alarm for 5.00pm t

View Open
#PressSample Ballet Flats are one of my favourite