How to improve air quality in your home

Whether you live in London, Pontypridd, Liverpool or Lancaster, it is possible that the air you are breathing inside your home is more polluted than the air outside. According to a study carried out by the environmental charity Global Action Plan, indoor levels of air pollution were 3.5 times higher than outdoor levels in these four cities – and over a 24 hour period, it peaked at levels which were 560 times higher than those outside.

These are alarming statistics and especially worrying as we age, and our lung capacity becomes impaired.

What causes air pollution within the home?

The accumulation of poor air in the home can be caused by a number of different factors, including:

We buy scented candles and air fresheners in a bid to improve our environment but, in fact, they may actually be harmful to our air quality and our health. Chemicals used in air fresheners can exacerbate asthma and wheezing.

Are we taking breathing for granted?

Until your breathing is impaired, it’s quite likely you will have been blissfully unaware of this life-giving bodily function. Breathing has a profound effect both on our physical and mental wellbeing and our quality of sleep.

Why do we need to breathe clean air?

Whilst the respiratory system is designed to cope with particles in the air, it works best when the air breathed in is as pure as possible.

We need a constant supply of oxygen to live. We need oxygen for energy production and for every part of our body, from our cells, tissues and muscles, to our digestive system and brain. We breathe to live, and the quality of the air we breathe, can have a positive or negative impact on our lives.

Ageing has an impact on your breathing and lung capacity

The need for clean air becomes even more apparent as we get older.

Deep abdominal breathing offers a host of benefits to the body including our respiratory system.

A study of 50 patients with bronchial asthma reported significant reductions in symptoms and improvements in lung function after 12-weeks of yoga breathing, with the most benefits associated with exercises which focused on expiration and emptying the lungs.

Dr Chris Etheridge said, “This finding is very telling because we know that our lung capacity, and with it the amount of oxygen we get into our body, deteriorates with age, while hyperinflation becomes more common.

“Hyperinflation is an inability to empty the lungs properly, which leaves a reserve of stale, un-oxygenated air trapped in the lower airways. Hyperinflation is a hallmark of chronic obstructive pulmonary disorder – the umbrella term for progressive breathing problems such as emphysema and it can have a corrosive impact on health.”

Dr Gill Jenkins points out, “Ageing impacts lung capacity in a number of ways, too. Supporting structures within the lungs are lost, reducing the number of alveoli which facilitate the exchange of oxygen and carbon-dioxide. Loss of muscle tone impairs our ability to clear the airways by coughing and also to breathe effectively from the diaphragm.

“Other age-related problems such as osteoarthritis – which compresses thoracic vertebrae and reduces the height of the ribcage – can also have a knock-on effect on lung function.”

How to improve the air quality within your home

As we spend 90% of our time inside, small changes could make a big impact on our exposure to indoor pollutants.

So, how can we improve the air quality within our homes, without compromising our health?

There are these easy and effective things to do: 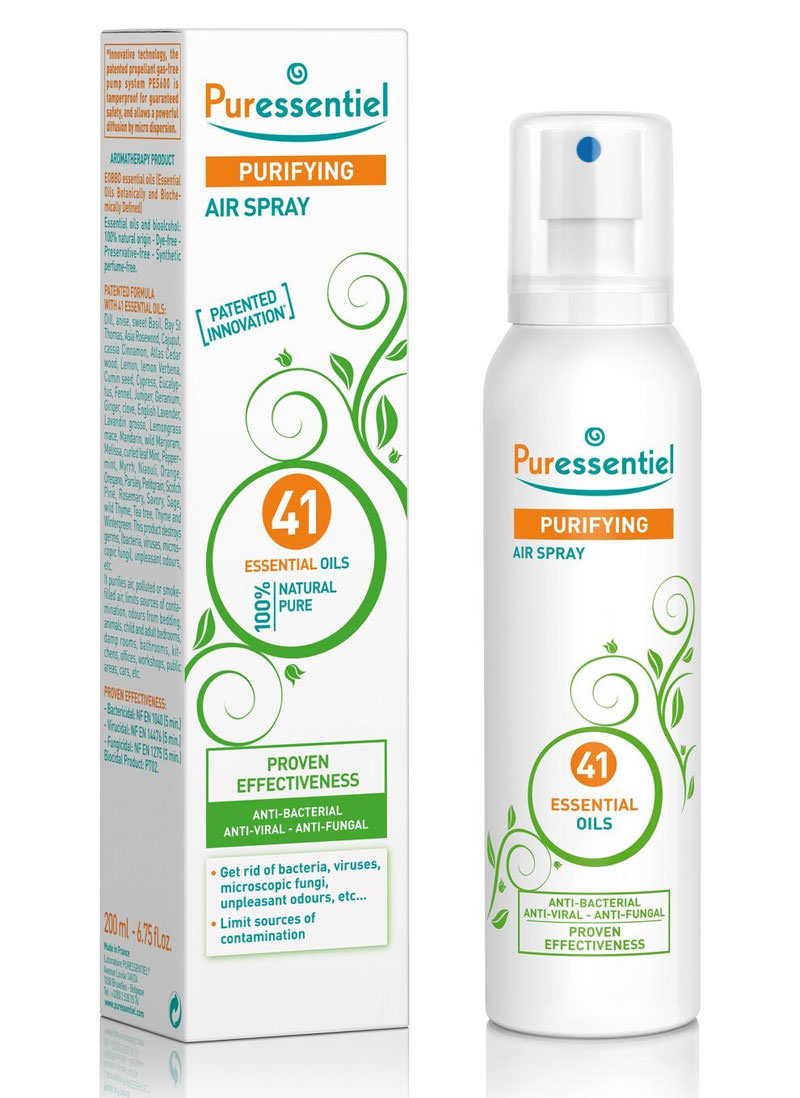 The simple and most effective way to improve air quality in the home is to use Puressentiel Purifying Air Spray. Formulated with a unique blend of 41 essential oils, the completely natural spray helps to forestall respiratory issues by tackling three common triggers for symptoms and poor air quality – airborne bacteria, fungal spores and dust mites.

When tested in the laboratory, Puressentiel Purifying Spray reduced the number of viable cells of four common bacteria, including Staphylococcus and E-coli, viable cells of candida and Aspergillus niger. And, a trial with 53 patients with a history of respiratory symptoms, showed significant improvements in two measures of lung function after just four weeks of use.

Puressentiel Purifying Air Spray is simple and safe to use

This clinically proven method of improving air quality and eliminating pathogens from the home could not be simpler to use. Spray 6-8 sprays into the corner of each room to be purified, several times each day, and particularly at night before bed.

Clinical studies have shown Puressentiel Purifying Spray to be well tolerated by asthma patients with no reported inflammation of the airways.

As the UK and many other countries around the world are in lockdown due to the Covid-19 coronavirus, we are all spending far more time at home. It has never been more important to improve the quality of the air we are breathing within our homes. We have been using Puressentiel Purifying Air Spray to ensure good air quality, especially for my husband who suffers from asthma. The pleasant smelling spray quickly refreshes each room making me feel confident that I have done all I can to eliminate pathogens from the home.

Puressentiel supplied a Purifying Air Spray for testing, this has been replaced by myself many times.

How to eat to protect your heart health

What are the best vitamins to take during menopause?

View Open
Hampstead Heath definitely not needing a filter to

View Open
20 years ago we went to NYC for my 40th birthday,