Gloria – at last a heroine we can all identify with!

As the Ageism and Sexism in the Media charter is launched, director Sebastian Lelio bucks the trend and casts an unknown fifty-something teacher in the lead role of his fourth film Gloria.

Gloria, a divorcee in her fifties is determined to defy old age and loneliness now her children have left home.  A whirl of singles’ parties leads to disappointment, until Gloria meets Rodolfo, an ex-naval officer.  However the encounter presents unexpected challenges and Gloria gradually finds herself being forced to confront her own dark secrets.  Director Sebastian Lelio and actress Paulina Garcia take you on a journey of discovery as Gloria asserts her own strength and independence in spite of a maelstrom of conflicting feelings.

Set in the modern city of Santiago, Chile, the story unfolds against a backdrop of Chilean politics and recent history.  Gloria is both uplifting and thought provoking as its impossible not to identify with a woman who feels neither old nor unattractive.  As more people over fifty are divorced or separated those of us born between 1946 and 1964 will be the first generation for which living alone is normal in old age.  The difficulties of starting a new relationship in middle age are clearly demonstrated as Gloria searches for someone to share her life.

So what has made the film such a hit with cinemagoers that a Chilean film is opening in 45 countries?  The Berlin Festival jury who awarded Garcia the Silver Bear commended the film, “for its refreshing and contagious plea that life is a celebration to which we are all invited, regardless of age or condition, and that its complexities only add to the challenge to live it in full.” 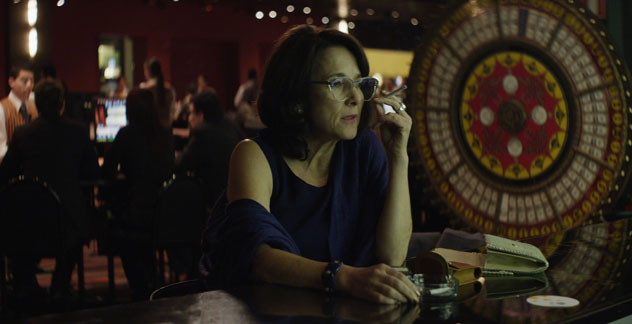 Reactions from film critics have been extremely positive.  According to Screen International‘s chief critic Mark Adams, “Paulina Garcia is quite wonderful in the role – she is in every scene, and does a remarkable job in portraying the fractured and fraying life of a middle-aged woman who is simply seeking affection.”

The film’s director Sebastian Lelio said, “I think that the energy in Gloria’s character is what makes this film vibrant and human.  In a certain sense, Gloria is like Rocky: the world strikes at her and beats her down, but she manages to get up once more and carry on forward, holding her head up high.  This, to me, was always a great reason for which to film this woman’s story, to film what we can see of her on the surface and to try film her mystery as well”.

The latest press reviews for Gloria are very impressive!

Uplifting and amusing in parts, Gloria is a sensual film exploring life and love for men and women of our age group.  You will want to commiserate and celebrate with Gloria equally – a film not to be missed!

The film will opens nationally on November 1st screening updates are available at: Facebook/GloriaMovieUK