10 Foods That Can Reduce Your Risk Of Prostate Cancer

As prostate cancer becomes an increasingly common diagnosis, researchers have recognised that what you eat plays an important role in whether prostate cancer develops and, if it does, whether or not it progresses.  Although there are no guarantees, it’s worth adding more of the following foods to your diet – and it’s a win, win situation as all of them taste great, and they’re good for your general health, too.

Soy beans provide isoflavones – plant hormones whose weak, oestrogen-like action neutralises the effects of excess testosterone, reduces its conversion to the stronger dihydrotestosterone (DHT) and helps to block the interaction of DHT with its prostate receptors.  Men who eat the most soy foods are at least 30% less likely to develop prostate cancer than men who eat the least.

Certain intestinal bacteria can convert one type of soy isoflavone into a more powerful version known as equol, which provides even greater protection against prostate cancer.  Less than one in three Western men carry the bacteria needed to produce equol, however.  Among vegetarians, the frequency of equol producers was 59% in one study, compared with 25% for non-vegetarians, suggesting that a plant-based diet may allow equol-producing bacteria to flourish in the gut.

Eating fermented foods such as live Bio yogurt may help to increase the chance of retaining equol-producing bacteria in your gut.  This is especially important after taking antibiotics which can dramatically reduce the level of probiotic bacteria present.  Fermented soy yogurt offers twice the benefits!

Sweet potatoes are a rich source of another type of plant hormones known as lignans.  As well as having a weak oestrogen-like action, they also inhibit the enzyme, 5-alpha reductase, which converts testosterone to the stronger dihydrotestosterone (DHT).  A Scottish study involving over 900 men found those with the highest blood levels of the lignan, enterolactone, had a 60% reduced risk of prostate cancer.  Sweet potatoes are eaten in a similar way to normal potatoes, baked, mashed or added to vegetable soups, stews and casseroles.  As a bonus they have a low glycaemic index, which has minimal effect on blood glucose levels compared with white potatoes.

Lignans are also found in flaxseed/linseed (but you must grind or crush these to release their lignans for absorption), pumpkin seeds, sesame seeds and lentils.  Consider adding one or two tablespoons of ground flaxseeds/linseed and/or pumpkin seeds to your diet every day.  Sprinkle them on cereals, salads, soups, or add to nut and seed mixes for a healthy snack.  Ground flaxseed/linseed is easily sprinkled over cereals, or used in baking. 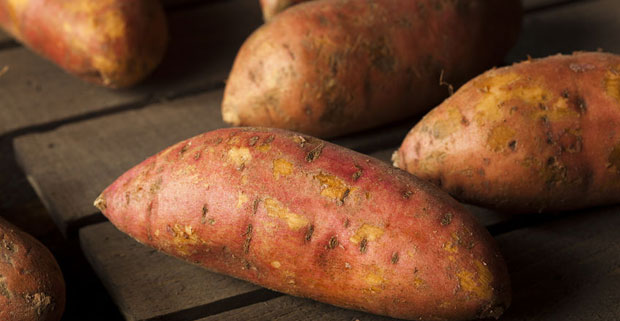 Tomatoes contain a red, carotenoid pigment called lycopene which protects against cancer by reducing damage to your DNA by as much as 50% over a 24 hour period.  A study involving almost 48,000 male doctors found that men who ate ten or more servings of tomato products each week were a third less likely to develop prostate cancer than those who ate less than one and a half servings per week.

Lycopene is locked away inside tomato cells and skins, so cooking releases five times more lycopene than if you ate the same tomatoes raw.  As a result, tomato ketchup and tomato purée are among the richest sources so passata-topped pizza and tomato ketchup all count and, as lycopene is fat-soluble, drizzling your margarita pizza with olive oil increases your dietary absorption of lycopene as much as threefold.

Aim to have tomatoes on most days, if you can.  Don’t peel them – wash them and include the skins in all dishes – seeds too for fibre.  I never follow instructions to peel and deseed tomatoes – what a waste of the best bits!  Drink tomato juice mocktails, make tomato-based pasta sauces, stews and soups, and serve them roasted with fish and meats.

Lycopene is also found in pink guava, papaya, red/pink grapefruit and watermelon, so these fruits are all good choices, too.

Garlic provides powerful antioxidants such as allicin, which is released by an enzyme reaction when you cut or crush a clove.  Garlic blocks the formation of nitrosamine toxins and reduces abnormal cell proliferation, which is why it is believed to protect against prostate cancer.  It has also been found to interact directly with DNA in human prostate cancer cells to switch on tumour suppressor genes.  In one study, men whose diet contained the most garlic were a third less likely to develop prostate cancer than those with the lowest intake.

Aim to eat garlic at least every other day, and preferably every day.  If garlic is cooked immediately after peeling, the enzyme reaction that produces allicin is inactivated so, after chopping or crushing your garlic cloves, leave them to stand for 10 minutes before adding to your food.  Add at the end of cooking to retain the most potency – but ensure your companions eat garlic, too!  If you dislike the smell or taste of garlic, garlic tablets are available, as is black garlic in which a natural fermentation process reduces the odour and taste, but increases the antioxidant benefits. 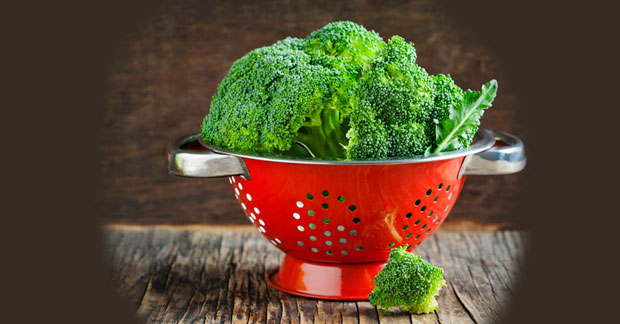 Cruciferous vegetables (named because their four petals form a cross) from the cabbage and turnip family contain anti-cancer compounds known as glucosinolates.  When crushed, chopped or chewed, these release hot or bitter tasting chemicals designed to discourage animals from eating them, though we tend to find them tasty!  These glucosinolates have anticancer actions and case-control studies comparing similar men suggest that men who eat the most cruciferous veg are 21% less likely to develop prostate cancer than those eating the least.  In men who already have prostate cancer, a US study found that men with the highest intake were 59% less likely to experience a progression of their prostate cancer than those with the lowest intake.

Microwaving and rapid boiling these veg reduces their level of beneficial glucosinolates so, where they need to be cooked, opt for steaming or light stir-frying (so they remain crunchy) if possible.

Fish provide omega-3 fatty acids, vitamin D and minerals such as magnesium, zinc and selenium, all of which are beneficial for prostate health.  Omega-3s regulate immune reactions, reduce inflammation and can suppress the growth of tumour cells.

In a review of 37 studies, involving over 495,300 men, ten studies showed a significant protective effect of fish/fish oil against prostate cancer.  Three studies suggested that increased fish oil intakes were associated with less aggressive prostate cancers, and three studies found a 48% reduced risk of a prostate cancer-associated mortality in those with the highest fish intakes.  Other studies were neutral, but overall it appears that eating fish may help to slow the progression of prostate cancer.

A healthy diet should ideally provide at least two portions (140 g each) of fish per week, of which one is oily, for heart, brain and joint benefits so any extra benefit for your prostate is a bonus.  Eat the fish as fresh as possible and preferably raw like the Japanese (sushi, sashimi) or lightly steamed, grilled, stir-fried or baked, until the flesh is just set.  Males are advised to eat no more than four portions of oily fish per week to reduce exposure to marine pollutants such as mercury, dioxins and PCBs.  If you don’t like eating fish, omega-3 fish oil supplements are available.  Those made to a pharmaceutical standard known as GMP (Good Manufacturing Practice) are checked to ensure no toxins are present.

Avocado is a rich source of healthy, monounsaturated fatty acids, plant sterols, lignans and other antioxidants such as vitamins C and E.  When extracts of the California Hass avocado were incubated with prostate cancer cells, they inhibited the growth of all cell lines, whether or not they were hormone-dependent. Researchers investigating risk of prostate cancer in Jamaica also found that men with the highest blood levels of monounsaturated fats were two thirds less likely to develop prostate cancer than men with the lowest intakes.  The main source of these monounsaturates was avocadoes.  Eating one or two avocadoes a week would seem about right – you could use avocado oil in salad dressings, too.

Blackberries, black and red raspberries, blueberries, cranberries and strawberries contain a wide range of antioxidants with anti-cancer benefits. Black raspberries are traditionally used to promote prostate health among Korean men and researchers have found black raspberry extracts inhibit the growth and proliferation of prostate cancer cells – especially those that are hormone-dependent.  When extracts were added to prostate cancer cell lines, they inhibited cell migration and invasion by reducing the activity of a group of enzymes known as metalloproteinases.

Eat berries fresh or frozen.  Add to soy yogurt, muesli, fromage-frais, fruit salads or any dessert.  Purée to make a coulis, or mash to make a salsa.  You can even dip them in dark chocolate for a delicious, healthy treat, or swirl mashed berries into soy cream and freeze to make home-made ice-cream.

Pomegranate juice contains higher concentrations of antioxidants than either green tea or red wine (both of which may offer some anti-cancer benefits, too). Men with rising PSA levels after prostate cancer surgery, or radiation therapy, who drank 240 mls of pomegranate juice per day experienced a slowing of their PSA doubling time from an average of 15 months to 54 months, with a longer period of disease stabilisation.  In another study, pomegranate juice prolonged doubling time by over 6 months in men with rising PSA levels after treatment for localised prostate cancer.

When pomegranates are in season, include them in your diet regularly – scatter the arils over just about any dish – sweet or savoury.  Pomegranate juice is now also widely available in healthfood shops and supermarkets.

Dr Sarah Brewer is a Medical Nutritionist and the author of Quick Nutrition: Prostate Diet for BPH, Prostatitis and Prostate Cancer* available on Kindle. Follow her nutritional medicine blog at Dr Sarah Brewer and her tweets @DrSarahB

View Open
#PressSample Sun’s out, SPF on! But don’t forg

View Open
My Father has Parkinson’s Dementia. His mind oft